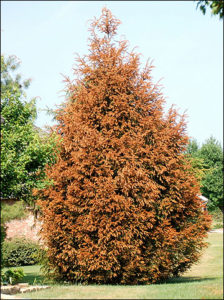 In 2004 Denver Water began providing recycled water for irrigating various Denver parks including Washington Park. The objective is to preserve higher-quality potable water to meet the region’s increase in household and commercial users. Recycled water is derived from sewage effluent that has been highly treated so that it meets current human safety standards for landscape use in public areas. Washington Park irrigation water is all pumped out of Smith Lake. The water in both park lakes, as well as what flows in City Ditch, is mostly recycled, though some natural rainfall on the two park lakes does enter the system.

Recycled water contains higher levels of some chemicals than potable (drinking) water does, including around five times as much sodium and chloride; those levels are potentially harmful to park landscape vegetation. Arborists have long known that many conifer tree species are especially vulnerable to high sodium and chloride levels. By 2011 the health of the mature conifers in Washington Park began to decline and by 2015 as many as 5/8 of the trees in the prized conifer forest called Evergreen Hill had to be removed. In response to the ensuing clamor, Denver Water and Denver Parks and Recreation convened a committee to deal with the problem. Besides representatives of those two agencies, members of the committee include FANS Board members Cindy Johnstone, David Matthews, Sonia John as well as representatives of other neighborhoods and outside technical experts.

Through the work of this committee, several provisional remediation measures have been taken to preserve and restore the conifers in Washington Park. On Evergreen Hill, many young trees have been planted of new species that are believed to have greater resistance to salts in the recycled water. A program of periodic supplemental irrigation using potable water was instituted once a week during the warm months. A sodium “blocker” chemical was added to the regular irrigation system. These and other measures were recommended by technical consultants to Denver Water in 2010 or earlier but weren’t utilized until this year. Another important part of the committee’s work is that a large series of ongoing chemical tests of water, soil and tree tissue have been started in various Denver parks so that we can evaluate whether the remediation measures are reversing the decline in park tree health.

FANS board member Sonia John is an excellent resource for more information.
To reach the board e-mail our board.

Our last meeting was held outdoors.

Please join us for the free, horticulturalist-led, informative tour.

This will be an informal tour and discussion about the new garden. Horticulturalist Michelle Simpson will discuss some of the plants and their ecological relevance, as well as the outlook on the next 2 years for the project. There will be plenty of opportunity for questions.

Please join us and bring your friends.